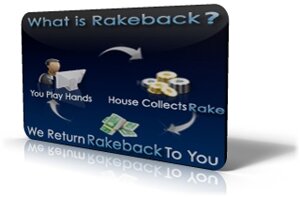 Finding the best rakeback options isn't always as easy as it should be, with rakeback becoming a standard for all poker players seeking the best value available when signing up for a new poker site - the myth is that you "need" an affiliate to get the best rakeback percentage, along with the best bonus and promotions available.

On this page, we'll show you how to get more of your rake back and we'll keep it simple.

What Is Poker Rakeback?

"Rakeback" is a form of a rewards program for frequent and loyal players.  As you play real money cash games a rake is taken out of each pot, this is how the poker sites earns a profit.  When you sign up for rake back, you will recieve a portion of that rake back as a refund. Having a rakeback deal has turned many losing and break even poker players into long term winners, and many of our players earn thousands of dollars in rakeback every month.  It is important to note that not every poker site offers rakeback, and you can only get rakeback by creating a new real money account at one of our reccomended rakeback sites.  When signing up, it is extremely important that you follow the instructions exactly as written, or we won't be able to pay back your rake refund rewards.

First, let's discuss the different types of rakeback available to you.  Rakeback can be calculated with different methods, like "dealt rakeback" and "contributed rakeback". Most rooms offer rakeback on the contributed calculating model, but the few poker sites that calculate with the dealt rakeback method seem to be the most profitable for tight aggressive players.

Most rakeback rooms now offer "automatic rakeback" which we think is great, players are rewarded directly by the poker room for the amount of rake generated. Some poker rooms pay rakeback daily, some weekly, and some once a month. We'll cover the details of how rakeback works and when rakeback is paid in each poker site rakeback review.

We also have a lot of poker sites offering rakeback to US poker players, check back soon for instructions on how to signup for rakeback. We like to see our visitors get the best poker offers available, so we're going to have a lot of sites you can get rakeback at.

After we detail the offers at all those rakeback rooms, we'll make sure signing up is easy and we'll also show you what the best rakeback codes and deposit options are. Our staff is hard at work to compile this information, we invite you to bookmark us or follow us on twitter for the latest rakeback options available.

Rakeback stats are updated directly by the poker sites and show up in your account manager, in most cases this is daily.  All players can see stats and tracking numbers on rake earned conveniently, refer a friend to rakeback tracking is also updated in that area as well as current rake chace leaderboards and rake race status updates for our private in house promotions. As always, support and VIP services can be accessed there as well. For more information log in or create a new rakeback account at our tracking and stats account manager.

Rakeback is still a service provided mostly at smaller poker sites, with the exception being Full Tilt which is the second biggest online poker room, only Poker Stars has more players but as you know Poker Stars does not allow us to offer you rakeback (instead their is a Poker Stars Rakeback equivalent that is just as good or even better) deals. If one looks at traffic stats, only one of the top five poker sites offers rakeback, again FT. Cake network, Merge, And Cereus poker rooms (UB and Absolute Poker) all offer good game selection and plenty of action while awarding our real money depositing players with the incentive of getting poker rakeback. Below is the most popular online poker rakeback rooms and signup details: